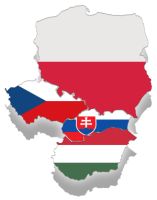 The Visegrad Group (also known as the "Visegrad Four" or simply "V4") reflects the efforts of the countries of the Central European region to work together in a number of fields of common interest within the all-European integration. Czechia, Hungary, Poland and Slovakia have always been part of a single civilization sharing cultural and intellectual values and common roots in diverse religious traditions, which they wish to preserve and further strengthen.

All the V4 countries aspired to become members of the European Union, perceiving their integration in the EU as another step forward in the process of overcoming artificial dividing lines in Europe through mutual support. They reached this aim in 2004 (1st May) when they all became members of the EU.

The V4 was not created as an alternative to the all-European integration efforts, nor does it try to compete with the existing functional Central European structures. Its activities are in no way aimed at isolation or the weakening of ties with the other countries. On the contrary the Group aims at encouraging optimum cooperation with all countries, in particular its neighbours, its ultimate interest being the democratic development in all parts of Europe.

The Visegrad Group wishes to contribute towards building the European security architecture based on effective, functionally complementary and mutually reinforcing cooperation and coordination within existing European and transatlantic institutions.

In order to preserve and promote cultural cohesion, cooperation within the Visegrad Group will enhance the imparting of values in the field of culture, education, science and exchange of information.

All the activities of the Visegrad Group are aimed at strengthening stability in the Central European region. The participating countries perceive their cooperation as a challenge and its success as the best proof of their ability to integrate also into such structures, such as the European Union.

As part of the enhanced cooperation in the context of the signed Memorandum of Understanding, the National Statistical Institutes of the Visegrad Group members prepare an annual publication presenting the main statistical indicators. Its elaboration is coordinated by the Statistical Office of the country holding the presidency. The first publication was issued at the time of signing the Memorandum (Main Indicators of the Visegrad Group countries 2018).

At the beginning of April 2019, the second publication of the Visegrad group countries was published(Visegrad group countries: Selected indicators of the 2030 Agenda for sustainable development) , prepared by the Statistical Office of Slovak Republic (currently holding the presidency of the V4) in cooperation with the National Statistical Offices of the V4 countries. Its main principles have become the key priorities of the Slovak Presidency program (Strong Europe, Secure Environment and Smart Solutions). They were reflected in the presented selection of the Agenda 2030 indicators, which referrer to the countries of the Visegrad Group.

From 1 July 2020 to 30 June 2021, Poland chaired the Visegrad Group. The period of the Polish presidency coincides with the 30th anniversary of Visegrad cooperation.

The planned activities included expert and working meetings. The first one concerned Global Values Chains – GVC, which was held online on June 1, 2021. The meeting was organized on the basis of the experiences gained during participation in the Eurostat grants, that are aimed at implementation of GVC survey according to the Framework Regulation Integrating Business Statistics (FRIBS). During the meeting, the experiences gained during the pilot surveys were exchanged, as well as information about the problems encountered and solutions found.

The next meeting at the expert level was the workshop on mirror analysis of foreign trade data with the use of microdata, which took place on June 28, 2021 (online). The aim of the meeting was to explain the discrepancy between foreign trade commodity between V4 countries, for the first time using ID trade partner data. In 2022, the provisions of the FRIBS on the mandatory exchange of microdata will enter into force. It will be preceded by a test exchange carried out on real data. The mirror comparison with the use of microdata made it possible to analyze the consistency of data from partner countries with the data collected in the country and to assess the effects of not collecting information on imports.

The last event organized by Statistics Poland under the Polish Presidency of the Visegrad Group is the seminar "Challenges for cross-border statistics in the context of the information needs of V4+ countries", scheduled for June 30, 2021. The aim of the seminar was to expand cooperation between the V4+ countries through the exchange of experiences and good practices. During the meeting, moderated discussions on the following topics were envisaged:

The opening session of the seminar, with the participation of the Presidents of the National Statistical Institutes of V4 and Ukraine, was organized as the high level part, during which the President of Statistics Poland, Mr Dominik Rozkrut, summarized the statistical cooperation over the past year.

During the Polish Presidency a joint V4 publication "V4 towards Europe 2020" has also been issued. Publication summarises the progress made by the V4 countries since 2010 on the background of the European Union. It presents a set of indicators monitoring the implementation of the Europe 2020 strategy goals in terms of employment, research and development activity, climate change and energy, education as well as poverty and social exclusion.

Due to the pandemic state caused by Covid-19 and the related restrictions, all activities during the Polish presidency took place in a virtual mode.